The Frost is All Over 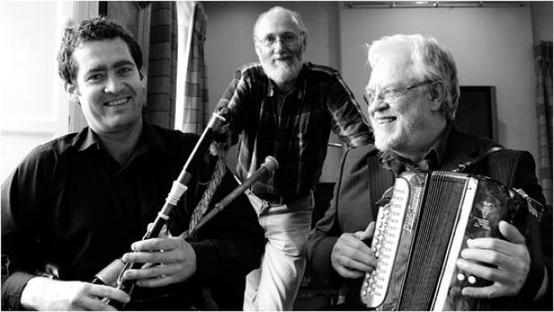 ‘The Frost is all Over’is an audio-visual show with acordion player Tony MacMahon, uilleann piper David Power and specially comissioned poetry by Dermot Bolger, acting by Eamon Hunt,  lighting and direction by John Comisky and production by David Teevan.

It was premiered in 2008 at the Junction Festival in Clonmel and also at Tradition DL in Dun Laoghaire and has since been performed in the USA, Belgium, France, and Scotland as well as a number of times in Ireland.
http://www.dermotbolger.com
The Frost is All Over
Tony MacMahon (accordion), David Power (uilleann pipes, whistle, fiddle, vocals), Dermot Bolger (poetry); Directed by John Comiskey, Produced by David Teevan/Ten42 ProductionsTradition  :  DL Festival, Pavilion Theatre, Dún Laoghaire, Co. Dublin 2 August 2008

"Tony MacMahon is not afraid to go to the frontline and fight for his view of what Irish music should be and to denounce those who, in his view, trample over the values, human and musical, carried by tradition. Denunciation, on the one hand; near-mystical evocation of Ireland and its music, on the other: this would be enough for some people to go for the old purist/moderniser clichés or to imagine that MacMahon has been in favour of freezing, or seeking to reproduce, traditional music as it was at some ideal communitarian moment in the past.

In his own musical practice, however, though hugely respectful of tradition, MacMahon has not operated under the dead hand of his forebears. His debut recording for solo accordion in 1972 was not just a collection of the tunes that he liked playing at the time. It took the LP as a form that allowed a lengthy statement to be made and translated onto vinyl the possibilities one person – one artist – saw in the musical language he had inherited. That vision was realised with such intensity that it became something of a burden – and at times seemed to make it difficult for MacMahon to simply enjoy being a player. But in the musical journeys he produced for television, in his recording with Noel Hill of a joyous session in Cnoc na Graí and various other performances, recorded and unrecorded, we have had many opportunities to experience MacMahon’s pleasure in playing.

The Frost is All Over, the Saturday night event in the second Tradition:DL festival, was not a concert in the usual sense, with players casually presenting the music they play and, in theory at least, free to change the running order of tunes or to respond to the mood of the audiences. It is described as a traditional music multi-media performance project conceived by Tony MacMahon. It involves two musicians, a poet, a director (John Comiskey) and a producer (David Teevan/Ten42 Productions). It is therefore a deliberately conceived show, a statement about the music. What was interesting, then, was to see MacMahon make his statement through others – or trusting others to realise his vision.

The Frost is All Over was never tempted by flamboyancy or showmanship. Three men sat on stage and went about their business. As if to prove that musicians do not need to be stand-up or, in this case, sit-down comedians, neither musician said a word. Piper David Power was an excellent musical partner for MacMahon. His interest was in the tune, not in projecting his own persona, though he wasn’t shy about showing his piping skills and his command of fiddle and whistle. He was a powerful interpreter of slow airs, using more of the resources available on the instrument than certain contemporaries. (Have the compromises entailed in group playing worked their way into the heart of some solo playing today?) If we except ‘The Fox Chase’, which is an exercise in technical extravagance, Power did not go over the top but clearly knew the piercing effect of judiciously placed sliding notes, for example. MacMahon too gave himself completely to the music, whether Sonny Brogan’s jigs, ‘O’Neill’s March’ or playing a slow air. It should be unnecessary at this stage to comment on the fluency and variety of his playing, but maybe we need to deliberately salute playing that values elasticity of rhythm over mechanical energy.

Dermot Bolger’s name is not much associated with traditional music, though his writing has shown an awareness of the layers of earlier experience that almost literally underlie the sprawl of contemporary Dublin. His contribution was the real surprise in the package. Clearly he had taken this project to heart and (as he confirmed afterwards) had soaked up everything he could from conversations with MacMahon. What he offered us was not a paraphrase of MacMahon’s musical musings or a romantic overpainting of the world of traditional music. Instead, he engaged imaginatively with the material: there was an element of the litany to the relish he displayed for names and places (Vauxhall factories in Luton as well as the fields of Leitrim); there was no glossing over the harsh detail of Seamus Ennis’ life or the bewilderment and struggle that faced emigrants; and there were nice touches like the ‘notes taken down in evidence’ by Chief O’Neill (the Chicago policeman and collector of tunes). It is hard to tell how these poems would read on the page, but they impressed in themselves and in the way they spoke to the music and to the well-chosen and striking black-and-white images that were projected on a screen behind the performers.

This was a tightly structured homage to the music and the musicians; it had as much the quality and length of a television programme as of a live show (the audience would certainly not have objected to another thirty minutes of music); and the images were almost entirely of the past. But if there was something almost staid about the format, in the passage from one performer to another, there was plenty to enjoy in the performances and the particular atmosphere created by the mutual respect of the performers."BARRA Ó SÉAGHDHA
﻿